Sulo ng Overseas Filipino is a year-long activity and is set up to award outstanding individuals and organizations whose contributions made a tremendous positive impact to the society and helped improve the lives of many. These individuals can come from various fields such as arts, culture, politics, public service, and entrepreneurship. This is also to help inspire other people to do good for the community. 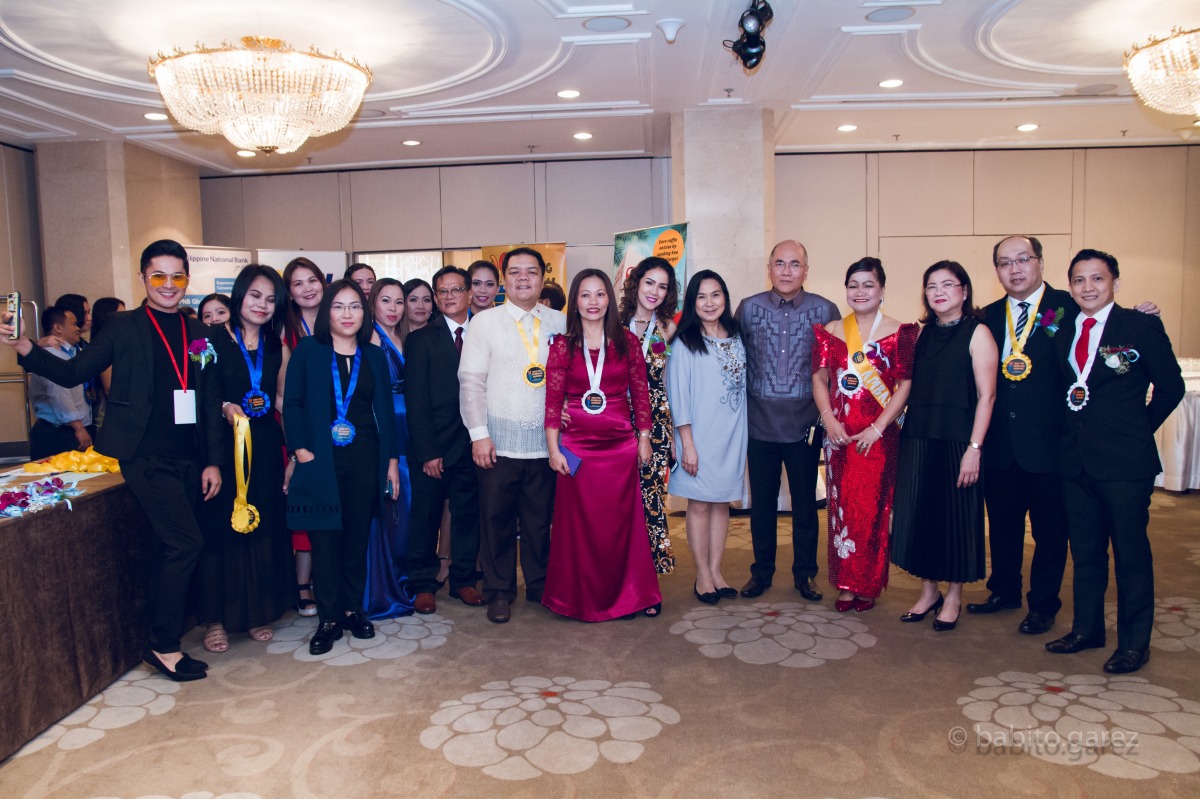 Last 29th of October 2017 was the success of the second Sulo ng Overseas Filipino awarding ceremony in Singapore held at the York Hotel which was organized by the Gawad Sulo Foundation Singapore.

Sulo ng Overseas Filipino is a year-long activity and is set up to award outstanding individuals and organizations whose contributions made a tremendous positive impact to the society and helped improve the lives of many. These individuals can come from various fields such as arts, culture, politics, public service, and entrepreneurship. This is also to help inspire other people to do good for the community.

The organization started in the Philippines and has expanded overseas and the Singapore chapter is now headed by Ms. Zeny Leong together with Mr. Regor Barozzo.

“Just like a ‘sulo’ which is normally being used in dark farthest mountains, forests and islands, the Sulo ng Overseas Filipino will share brightness and bring hope to all of us especially during times of calamities, disasters, crises and struggles when darkness and hopelessness embed among the people and the society”, said by Mr. Rexonne Nebre, Secretary-General of Gawad Sulo Foundation Singapore. He also spearheaded the search of the awardees, securing their contacts and getting in touch with them.

Into The Abys had a great privilege to be one of the hosts together with the Morpheus Stars, Kelly G, Karina Bacsain and Janina Espinosa. The program was divided into two parts. It started with the ‘Natatanging’ Sports Award Presentation followed by the ‘Natatanging Negosyo’, ‘Natatanging Organisasyon’ and ‘Natatanging Indibidwal’

While some were earnestly listening to the encouraging speeches of the awardees and while enjoying the performances in between, others took the chance to visit the exciting booths of the sponsors located just outside the entrance of the hall. LBC Express, PNB, iRemit Singapore, and Noble Life were few of the many sponsors.

Mr. Regor Barrozo, Gawad Sulo Singapore Ambassador and OFW Global Movement Singapore Chapter President, closed the ceremony with his remarks thanking all the sponsors, award partners and volunteers. He highlighted that their organization’s quest in lighting up torches will not be possible without their unceasing support.

I wish I can share with you the full list of the awardees in this article. But there were just many and it is deeply inspiring to learn that there are actually a lot of fellow Filipinos out there who are taking extra step for the betterment of our Singapore OFW community. According to Ms. Sherley Bianca Baring, head of Finance and Media Communications of Gawad Sulo Foundation Singapore, there were a total of 60 natatanging awardees this year; 17 for the Natatanging Organisasyon, 15 Natatanging Indibidwal, 15 Natatanging Negosyo and 13 for Natatanging Volunteers.  I will update this article and share a link on the full list of this year’s awardees as soon as it is available online.

Here are more of the individuals, institutions and organizations who stood out for this year in serving as “lights in the darkness”. Check out their inspiring stories  and how they made it to be a role model to inspire others to serve the people more.

The awardees further expressed their heartfelt appreciation on their Facebook accounts. Here are some of their heart-warming posts:

Gilbert Santos is one of the founder of Gilas Basketball League Singapore, ‘Natatanging Organisasyon’ awardee. Their organization is committed in providing high quality basketball tournaments to fellow OFW kababayan in Singapore. Their organization instill sportsmanship, camaraderie and healthy living among the participants. It is also open to everyone, regardless of race or nationality, who share the same passion for Basketball. 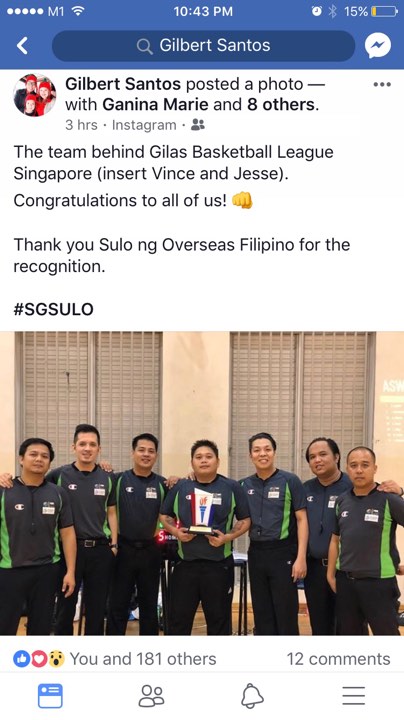 Ms Aniceta Cataran, ‘Natatanging Indibidwal’ awardee as an outstanding government official, expressed her gratitude to her family and colleagues. She further emphasized that the award is dedicated to all the people who supported her endeavor. 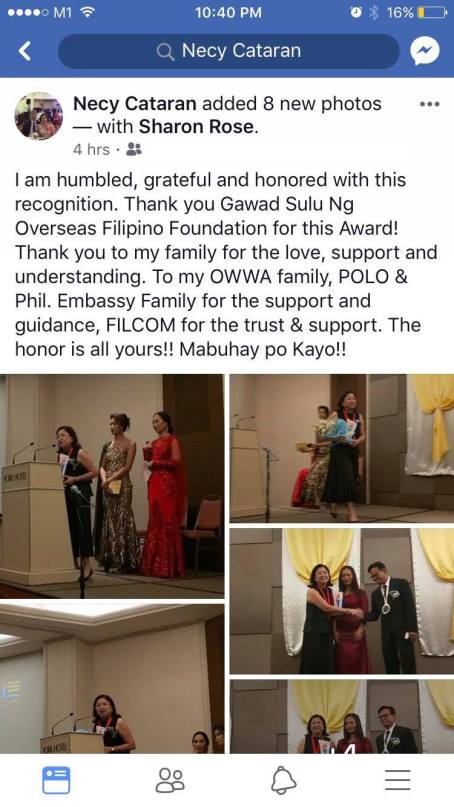 Mr. Obet Rivera, a ‘Natatanging Indibidwal’ awardee, is a musician who is used to perform around asia and now works a guitar teacher at Ossia Music School Since 2008. He is now a DJ in Radyo Filipino Network, broadcasting from Singapore, showcasing artists from all over the globe. 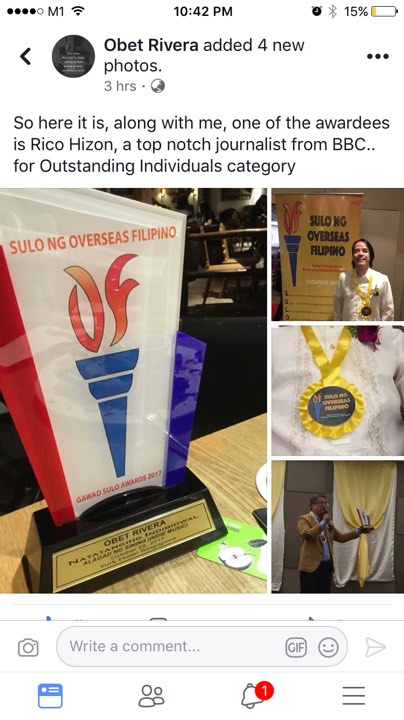 Mr. Rico Hizon also shared his honor to be awarded as ‘Natatanging Indibidwal’ under Media and Journalism. He is a broadcast journalist from BBC World News. He took up communication Arts and Business at De La Salle University. He previously worked at GMA News & CNBC. In his almost 25 years as a broadcast journalist, he has interviewed high profile personalities such as Bill Gates, Tony Fernandes, Richard James, Kobe Bryant and many more. He is a multi-awarded broadcast journalist, a business news presenter and a proud Filipino. 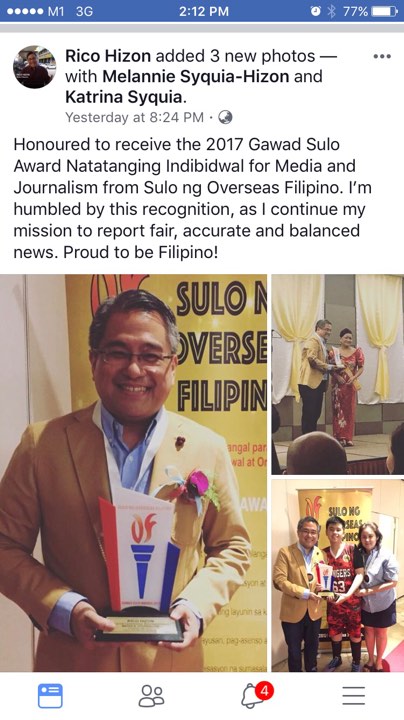 Congratulations to the team behind this prestigious event, Gawad Sulo Foundation Singapore. Thank your for illuminating our hearts once again for this years’ set awardees. Your organization’s quest alone has already made a positive impact. The Singapore Filipino Community are with you in your pursuit. May you continue to be torches of inspiration seeking unique individuals whose drive and passion in life carry flames of hope for the Filipinos working overseas.

Hey there! I'm Aby. I am a Filipino based in Singapore for 6 years now. Physically fit, hungry to learn and become better. As much as I would want to live a simple life, I just can’t help to urge myself to go out, grab opportunities, talk to people, travel as far and as wide as possible, sleep on the floor if I have to or find out how people live, eat and cook. I want to see the world and learn from wherever I go. I want to boost my self-confidence and become a story-teller from all the places and circumstances I’ve been through. I want to do whatever stuffs I love and gratify my restless roaming & artistic spirit. View all posts by Aby

What is ‘Into The Abys’?